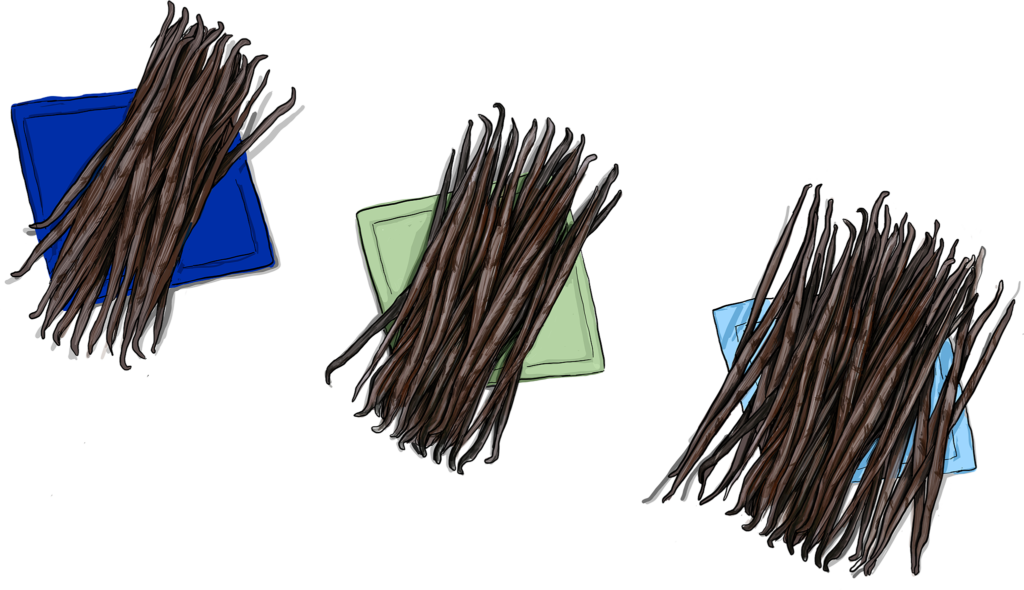 Vanilla beans worldwide have NO overarching authority on grading and typing, coloration and caliber, and from 2010 to 2020 the monikers and markers of quality and type have been steadily eroding in parlance and publishing. All conventional beans of all types here are organically grown and have no radiation, BSE, allergens, GMO, agricultural chemicals, nor known aflatoxins, and are cultivated in the traditional bourbon method, passed down the from the bourbon isles as a hand-pollination regime and routine, that has become the most labor-intensive and nuanced and delicate preparation technique for any plant in the world. Vanilla beans unless otherwise stated are on average, with most normal triage, at a natural biological median of mixed lengths between 14-19cm. Regular general “Grade A” or “Bourbon” vanilla beans are most commonly used to describe the average stereotype : beans of about this length, with few or no splits, that have around 30% humidity, and thus are not too wet to be unstable, and not too dry to stop radiating aroma and aesthetics.

(General Term for Black color beans and is now used to talk about all vanilla in Madagascar that appears black, as vendors largely stopped discerning in marketing.)

(35-38% humidity and appears juicy, but inferior quality as it it used to sell more beans by dishonest companies and maintain higher margins by avoiding bleeding off the water weight and hence profit. Gourmet beans can be vacuum packed to appear juicy and be aromatic and can if handled as perishable and a timebomb with a halflife (after which they dry out or mold up) they can be used immediately for brewing extracting or baking. More often and unfortunately, these beans have not expressed their full flavor, are nice in appearance, but unstable, in criticial need of vacuum to biologically and aerobically stabilize, and carry a risk of mold as a near certainty within a month. There are many “gourmet/premium” vanilla beans sold on www.amazon.com for their nice appearance, sadly masking inferior flavor and subtance being mostly water. They sometimes are awash with a vague and nondescript phenol medicinal smell, from the benzenoid crystal inside the young bean having turned into phenol rather than vanillin crystals)

(In recent times, TK vanilla is used to describe beans around 30% humidity, give or take, with balanced vanillin-to-moisture ratio and lab analyses match, and a fully developed aromatic expression and flavor.) Good vanilla at this level and as it ages and dries may also have off-white or sugar-like vanillin crystals on the surface, or spiking from the skin like ice.

22-25% humidity, which begin to appear “fox-colored” red in contours and surface. These are beautiful and just dry, and you must get closer to smell the flavor, yet the flavor is just as potent as TK.

In Madagascar’s regions spanning Andapa and SAVA’s vanilla coast and Diana, vanilla tends to be more red, while in Madagascar’s Mananara and Maroansetra vanilla (from south of the great Masoala rainforest) is blacker color. Once boiled the color tone vanilla turns further hinges on whether it is put also directly in the sun or is put in shade first in what order. – If direct in sun it ends up “redder.” The surface of the bean husk interacts with photons and different kinds of radiation that comes through earth’s atmosphere, as reactively and expressively as that way leather or human pigment does. It thus isn’t just a function of sunlight and soil that results in color hue and tone of the pod’s skin.

Premium ground Madagascar vanilla powder, for example, which sells and smells amazing and tunes at the biological level to 1.6-1.8% vanillin, is ground from red vanilla beans and their red splits (split pods.) How to choose between red and black vanilla? – There is a marked difference between the flavor profile (not objective superior or inferior quality, but actually subjective taste) of red vanilla and black vanilla, and a difference in the finished scent of the pod and its strength of aroma, the “jump” of the smell from the beans’ exposed particulate matter that transits through air to the human nose.

Beans around 15-20% humidity, being very brittle and hard and shrunken, but bursting with flavor. These beans may be deceptively empty in smell because they have dried and closed all of the pores on their skin and cannot “breathe,” so it can be difficult to tell if they are good vanilla with lots of vanillin per weight, or extracted or spent vanilla.

There is no such thing as a grade of vanilla bean and no standards organization. Anybody can say anything is grade A. Typically it is used and abused to indicate beans that are black, intact, and nice in appearance.

There is no such thing as a grade of vanilla bean and no standards organization. Anybody can say anything is grade B. Typically it is used and abused to indicate beans that are brown, messy, and ugly in appearance. Often, it is used to sell garbage-grade vanilla with no flavor or that has been extracted.

These are simply vanilla beans which have been grown small naturally by chance, with no difference in the end flavor or character. They are cheaper simply because of length of less than 14cm.

These are simply vanilla beans which have been split naturally from sun curing, or by hand, with no difference in the end flavor or character. They are cheaper simply because of appearance.

These are vanilla beans which are very inconsistent in appearance, size, even shape, and are very messy or cut or small, crooked, bent, or otherwise. There is no difference in end flavor profile. They are cheaper simply because of appearance.

These are cuts which are ground into dry fine powder and feature more surface density and can be better absorbed for some uses.

This is scam powder which is sold after beans have been extracted for flavor, and is the leftover dead husks and shells and tannins without much or any vanillin inside. It is sold legitimately for decoration, and illegitimately as vanilla powder for flavoring, to unknowing customers.

These are the tiny black seeds scraped from the inside of the bean, the most expensive vanilla you can get. They have the appearance of caviar

This is a term either for excellent and very expensive caviar, or for ground specs of garbage vanilla that is used to scam customers. Watch out – and be sure which is which when requesting and comparing.

Most vanilla matter has vanillin content of around 1.5-2.5% or so. This occurs in nature and mainstream industry for a reason – Vanillin molecules are insolvent totally after 5-10% level, and waste is needed after that threshhold which means it is impossible to use. More than 3% vanillin level is less solvent, and clusters, and so wastes flavoring effectiveness. In order to break up high vanillin content above the natural level, you need to use chemical and totally inorganic (and harmful often,) solvents. There are no vanilla beans in nature with supernaturally high vanillin levels, and biologically evolution has made the vanillin level in the plant bear out this efficiency.